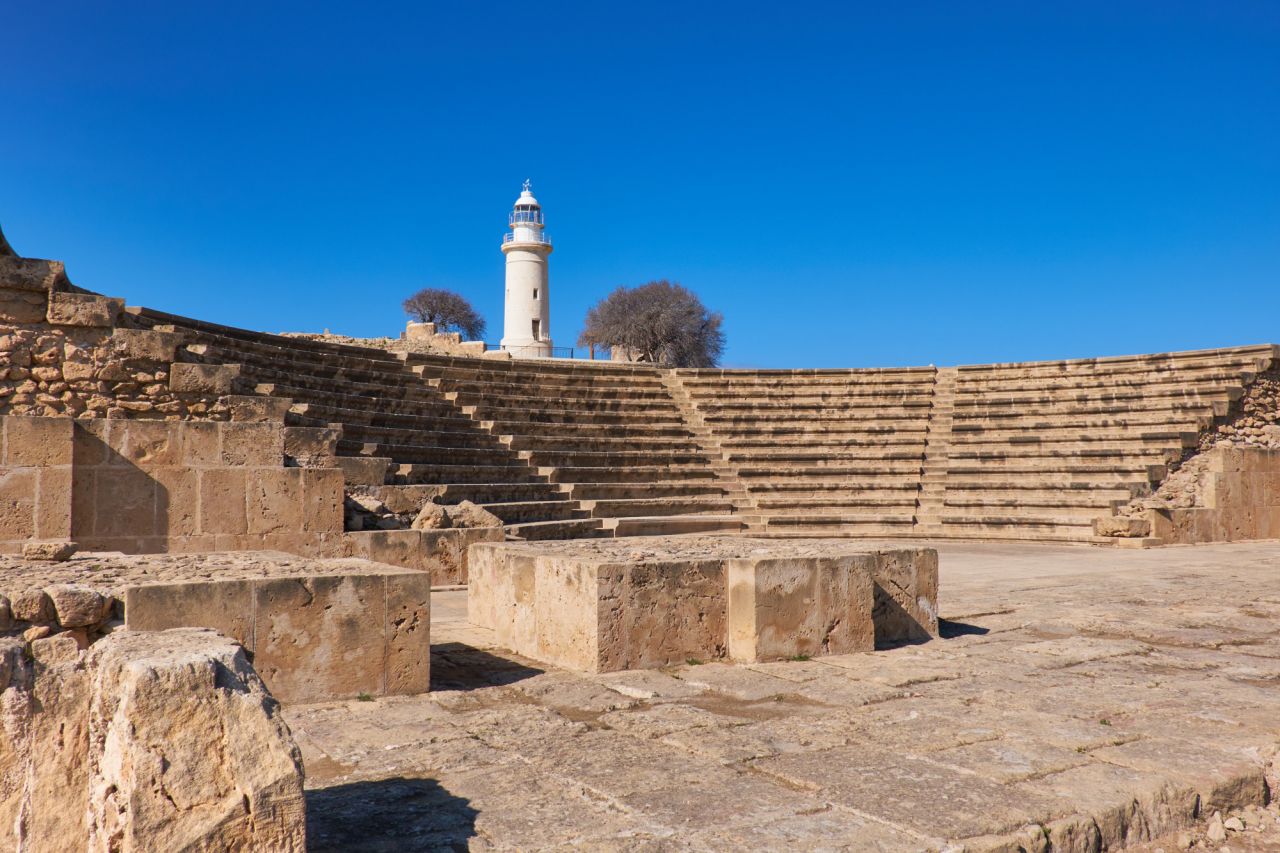 The Paphos Archaeological Park (also Kato Paphos Archaeological Park) contains most of an important ancient Greek and Roman city. Paphos is located on a small peninsula on the southwestern coast of Cyprus, protected on its northern slopes by the Troodos Mountains. Still, under excavation, the park is situated in the Nea Pafos ("New Paphos") section of the coastal city.

This important archaeological site is made up of two different areas: the city of Kato Paphos and the town of Kouklia. The first includes the ancient city of Nea Paphos, the holy city of Aphrodite, and the cemetery of Tafoi ton Vasileon (Tombs of the Kings). In Kouklia are the ruins of the temple of Aphrodite and Palaepaphos, Old Paphos.

Its sites and monuments dating from prehistoric times to the Middle Ages. Among the most significant remains discovered so far are four large and elaborate Roman villas: The House of Dionysus, the House of Aion, the House of Theseus, and the House of Orpheus, all with dazzling preserved mosaic floors, most notably one of Orpheus. Also, excavations have found an agora, an asklipieion, a basilica, an odeon and a Hellenistic-Roman theatre, and a necropolis known as the “Tombs of the Kings.”

Nea Paphos is one of the three components that make up the Paphos archaeological complex, inscribed on the UNESCO World Heritage List in 1980 for its outstanding ancient remains. It was founded at the end of the 4th century BC by Nicocles, the last king of nearby Palaipafos. At the beginning of the 3rd century BC, it became part of the Ptolemaic kingdom, becoming the most significant population on the island under this dynasty. When Rome annexed Cyprus in 58 BC, it plays a prominent role as the island's capital. Its splendour was nipped in the bud by strong earthquakes in the 4th century AD, which led to the installation of the capital at Salamis, renamed Constantia.

The archaeological park has a wide variety of activities for tourists and sites of interest, fully accessible to the public. Nearby is the Paphos Pier and Harbor, another area that certainly deserves to be visited.
As UNESCO well explains on its website, Paphos is protected and managed under the provisions of the National Antiquities Law and international treaties signed by the Republic of Cyprus. The government primarily owns Paphos due to the Department of Antiquities policy of gradually acquiring land within and around the sites. Besides, the Act establishes the establishment of "Controlled Areas" within the sites’ surroundings to determine the height and architectural style of any proposed building; such areas exist for both Kato Paphos and the village of Kouklia. In November 2010, the UNESCO Committee for the Protection of Cultural Property in the Event of Armed Conflict granted Paphos the status of "enhanced protection.”

How to get to Archaeological Park